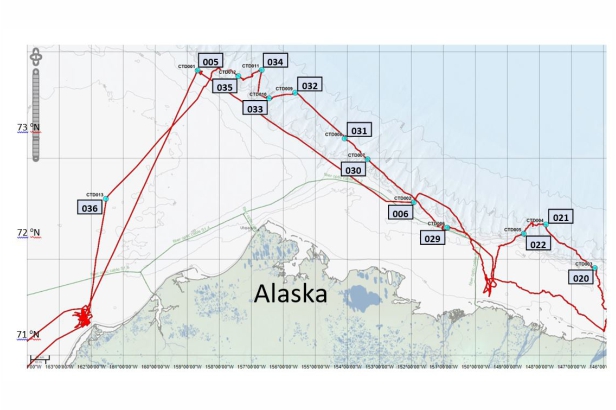 The Go-West expedition (Sea-ice association of Polar cod and its prey in the western Arctic Ocean) funded by ARICE took place on board the RV Sikuliaq in a joint cruise supporting both the Go-West and the CODA (Coastal Ocean Dynamics in the Arctic) expeditions from 6 November to 2 December 2019.

The Go-West team was composed by 11 on board participants from seven different institutions:

The overall goal of the Go-West expedition was to test the hypothesis that entrainment of young Polar cod into the sea-ice habitat in the Chukchi and Beaufort seas during autumn is significant, and hence sea-ice association is an important survival strategy with positive effects on recruitment to the adult population the following summer. The main objectives of the collection of samples were to:

During the expedition, samples of Polar cod and its prey were collected in the ice-water interface layer along with high resolution profiles of sea-ice and surface water properties with a Surface and Under-Ice Trawl (SUIT). Backscatter of fish and zooplankton in the water column was recorded with the Sikuliaq´s EK80 echosounder and pelagic communities was sampled with two midwater trawls (Methot trawl and IKMT) and vertical zooplankton nets (CalCET and ring net). A conductivity-temperature—depth probe equipped with a rosette water sampler (CTD) sampled vertical profiles of temperature, salinity and fluorescence and was used to collect water samples for the analysis for chlorophyll ɑ concentration, nutrient concentrations, trophic biomarkers and harmful algae (HAB).

During four ice stations, samples of the sea ice for the same parameters (except nutrients) were performed with hyperspectral light measurements needed to derive ice algae biomass from hyperspectral profiles obtained from a sensor mounted on the SUIT. In addition, respiration measurements were performed on abundant zooplankton prey species of Polar cod. Altogether, 11 SUIT stations were completed (1 in open water, 10 under ice), 4 ice stations and 3 midwater trawls. All SUIT deployments were succesful, expanding Sikuliaq’s capability of advanced scientific operations in ice-covered waters. Polar cod were caught at all SUIT stations, totalling 153 fish.

The research indicate that most fish appeared to be first-year juveniles between 6 and 8 cm in size, pending age determinations. Fish abundance increased with increasing ocean depth, sea-ice draft and abundance of the ice amphipod Onisimus spp. The mesozooplankton community in the upper 50 m was dominated by the copepod Metridia longa. Respiration experiments indicated that Metridia and, surprisingly, Calanus glacialis from shelf stations were in an active metabolic state. Chlorophyll ɑ concentrations were low (< 0.5 mg m-3) in the water column. Conversely, visual inspection of ice core filters indicated that ice algal biomass had already begun to accumulate in the autumn sea ice. The trophic relationships between ice algae, zooplankton and sea-ice fauna and Polar cod will be analyzed in detail based on hundreds of biological samples, including diet and trophic biomarker samples. Investigations of otolith microchemistry and population genetics studies on each sampled fish will help elucidate their origins and migration patterns. Preliminary results of this expedition support our hypothesis that juvenile Polar cod associate with sea ice in autumn and show that prey is available to sustain them at the onset of winter.

All samples collected during the expedition were listed in a central sample database and will be searchable through the ARICE dataportal and available for further research by request to the responsible scientist. 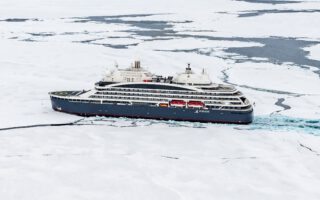