The EU funds an Arctic Research Icebreaker Consortium, which will provide researchers with improved access to research icebreakers.

Fifteen partners from thirteen countries including two North American partners from USA and Canada have joined forces to improve the capacities for marine-based research in the ice-covered Arctic Ocean. In the project “ARICE- Arctic Research Icebreaker Consortium”, they aim at better coordinating the existing polar research fleet, at offering scientists access to six research icebreakers and at collaborating closely with the maritime industry. The European Commission funds the project, which is coordinated by the German Alfred Wegener Institute, Helmholtz Centre for Polar and Marine Research (AWI), with 6 million Euros. The project kick-off meeting takes place at the German Maritime Museum in Bremerhaven 6th to 7th February 2018.

Retreating sea ice and warming waters create opportunities and challenges that have given rise to an unprecedented political and economic interest in the Arctic Ocean over the past decade. Increased European funding of polar research demonstrate how critical science-informed decision-making has become in the face of a changing Arctic. These investments have enabled European scientists to contribute substantially to understanding the ongoing processes. However, compared to the knowledge base needed for effectively predicting the effects of climate change, the available datasets are still insufficient.

One weak point of the polar research community is the small and ageing existing polar fleet. Research icebreakers are a crucial infrastructure and tool for conducting scientific investigations in the ice-covered areas of the Arctic Ocean – those regions that urgently need to be explored before they disappear. The lack of availability of icebreakers in Europe and beyond and a weakly coordinated polar research fleet impedes Europe’s capacity to investigate this region. There is thus an urgent need for providing polar scientists with better research icebreaker capacities for the Arctic.

This need has now been taken up by the EU funded Arctic Research Icebreaker Consortium (ARICE). The consortium, consisting of fifteen partners from thirteen different countries including two North American partners aims at giving the Arctic science community fully funded access to six research icebreakers capable of venturing into the Arctic sea ice. For the first time ever, European scientists and the international community will be able to apply for valuable time on any of the icebreakers in order to conduct their research in the Arctic Ocean. “Who gets access is based solely on the scientific excellence of their research proposal. However, we especially encourage early career scientists and scientists from countries lacking direct access to a polar vessel to apply for ship time”, states Nicole Biebow, the ARICE project coordinator from the Alfred Wegener Institute.

ARICE will amongst other expeditions, give scientists access to the German research icebreaker Polarstern during the MOSAiC expedition. MOSAiC stands for Multidisciplinary drifting Observatory for the Study of Arctic Climate and is the first year-round expedition into the central Arctic exploring the Arctic climate system. PRV Polarstern will drift with the sea ice across the central Arctic from October 2019 until October 2020, serving as a platform for measurements over a full annual cycle.

Besides granting transnational access to a scarce resource – time on a research icebreaker – ARICE will develop strategies to ensure a coordinated and improved use of the existing polar research vessels at a European and international level. In the long run, ARICE aims at implementing a sustained International Arctic Research Icebreaker Consortium, which jointly manages and funds ship-time in the Arctic. This would ensure a cost-effective usage of the existing research icebreakers and streamline polar research programmes across national borders in order to jointly address the global challenges imposed by Arctic change.

Finally, ARICE works towards establishing closer links to marine business in order to adding to the observational capacities in the northern polar region. By establishing a programme of ships and platforms of opportunity, commercial vessels operating in the Arctic Ocean will collect oceanic and atmospheric data on their cruises. At the same time, science and industry will work together to explore new technologies, which can improve ship-based and autonomous measurements in the Arctic Ocean. One output of the project will be a 3D virtual icebreaker, which allows remote access to data and provides real-time information to a broad audience.

Given the strategic importance of ARICE, the European Commission (EC) decided to fund the project within its Horizon 2020 Work Programme. Over a project lifespan of four years, the EC invests 6 million Euro in the consortium, of which 50 % will be used for giving researchers access to the research icebreakers.

Notes for the media

If you are interested in attending the ARICE kick-off meeting, please contact the project manager Veronica Willmott (veronica.willmott@awi.de). 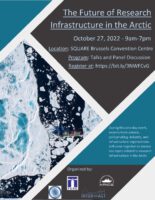 The future of research infrastructure in the Arctic